At Parc Baudoin there is a family of swans.
Every time we go there, I see them growing up. Today they were in the little lake, sliding elegantly on the water.
I wonder where they go afterwards, as there is no trace of the previous clutch.

Benjamin Moloise was a Southafrican poet who was hanged by the apartheid regime.
We thought he was the right person to whom dedicate the transcultural association we wanted to create, and the ASTRACUBEM was born.

We arrived soon on the pages of the new newspaper: La Repubblica, contesting for the publishing of an advertisement for tourism in South Africa.

The first activities we tried to organise were not successful: a meeting bringing together the Southafrican Embassy and the representative of ANC (at the end of the 80s, Mandela was far to be freed). We then tried with the Israeli Embassy and PLO, but again we couldn’t debate.

We had to restrain ourselves to less complicated activities:
a celebration for Nelson Mandela seventieth birthday, 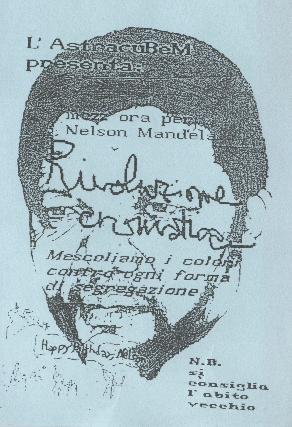 a tombola to collect money for sending bycicles in El Salvador ,

cows in the Amazonia,

and for the independence of Timor Este.

After 1989, also celebrations (and even a movie) to remember the October revolution. 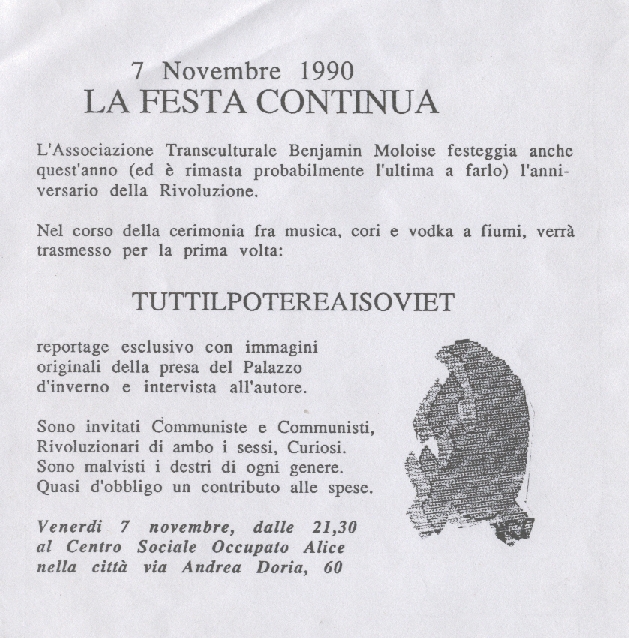 I started the ABC Book (expression much less effective than Abbecedario) for my cousins’ sons. Then I added the French definitions for my nephews and my goddaughter. And finally, I updated it in three languages (not in English, unfortunately, but with Spanish addition) for little Paula.

I used some of my drawings, sometimes widening them with the Russian zoom lens I used for printing photos (I had got it in exchange for my collection of Tex strips, but that is another story).

The job was not simple, I passed many hours on the desk; when I started I did not use the computer but pencils and an Indian ink pen.

Later on, I prepared an electronic version; smaller. You may find it here :
http://ilmiolibro.kataweb.it/schedalibro.asp?id=128967

As announced from the beginning, this blog should also serve to keep the memory of certain happenings; as I often feel that many are vanishing.
I’ll go backwards to look for some relevant pieces (relevant to me, of course).
I chose to use an alphabetic criteria rather than a chronological one.
I will start today (in a separate entry) with A as ABC Book.

No reference.
No safe heaven.
No (collect) call.
No more socks and shirts.
No family recipes.

Mr. De Magistris, new elected mayor of Napoli town, is facing a difficult challenge. To be up to his task he needs to create confidence and gain respect, also from opponents and sceptical people (quite numerous in Napoli).

Declaring that in Brussels (as he stayed as European Parliament member) he felt less safe than in Napoli is probably not an intelligent move and risk to be perceived from local audience as a revival of an ancient comedy figure, introduced by the famous comedian Toto’: that one of the ‘guappo di cartone’ (= carton-board thug).